The exhibition commemorating the 260th anniversary of the birth of the cartographer and meteorologist František Jakub Jindřich Kreibich (1759-1833), parish priest in Žitenice in the Litoměřice region, presents the life and work of the most important representative of our cartography in the first third of the 19th century. Kreibich focused on the territory of the Czech Kingdom, especially in the wider area of ​​northern Bohemia, where he came from and where he spent his entire life. He also focused on astronomy, topography and meteorology: his continuous series of meteorological measurements was the second most continuous in the Czech Republic after the Clementine series.

The exhibition will present thirty maps from the collections of the National Library of the Czech Republic and from the cartographer's inheritance stored today in the Map Collection of the Faculty of Science, not only prints but also manuscripts, including sketches, trigonometric networks and copies of contemporary maps. The first Kreibich maps were created in connection with the Josephine reforms of ecclesiastical administration, the last of which show the onset of industrialization. Therefore, we find on them abolished hermitages, which could no longer serve their purpose, but also transport projects, which often did not even realize.

Above all, however, these maps illustrate fundamental changes in the field of cartography itself. In their work, the author based his extensive cartographic material, which he systematically collected, from numerous journeys in Bohemia, during which he obtained topographic knowledge directly in the field, but also from astronomically determined places. Their thematic breadth ranges from ecclesiastical administration, through postal routes, administration of the manor, organization of the defense, measurement of land borders to hydrological conditions.

Cartography in Times between Hermitages and a Horsecar

(1759–1833), presents the life and work of the most important representative of Czech cartography of the first third of the19th century. Exhibited are thirty maps, both printed and manuscript, including sketches, trigonometric networks and copies of period maps. In them, we can see closed hermitages that had not served their purpose after the reforms of ecclesiastical administration issued by Joseph II, as well as transport projects demonstrating the development of industrialization. 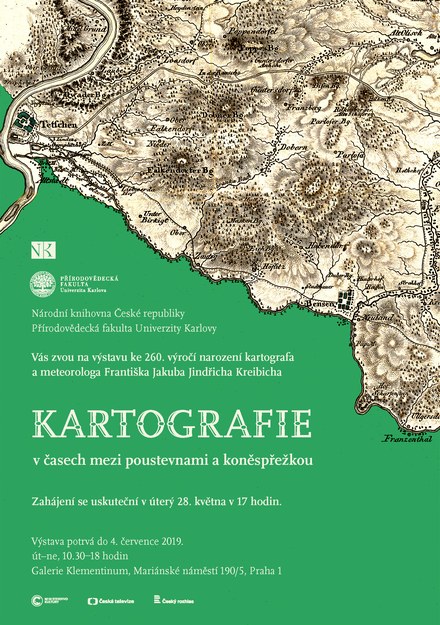