The exhibition presents the family company J. Felkl and son (1854–1952), which has been active in Roztoky near Prague for almost 100 years. They also printed the first globes in national languages, not only Czech, but also Hungarian and Polish. They held two patents for special decomposing globes. But they also offered special devices such as tellurium, sololunariums, planetariums and armillary spheres. They exported to Europe and overseas. Their globes have been awarded at many world exhibitions (Paris, Vienna) and national exhibitions (Prague, Lviv, Melbourne). Apart from the company and the family, the exposition presents the factory and working conditions, the workshop manager and workers, domestic and foreign authors of the company, but above all globes in various language versions, tellurium, press stones, original instruction booklets and original period advertising.

Jan Felkl and son deserve our attention, as it still represents honest Czech craftsmanship combined with a high level of teaching aids in the world.

More than 60 globes made in 1855–1947 will be presented, as well as plastic models of maps, craft tools, lithographic plates and lithographic press, archival documentation of the company's production and authentic photographs.

Subjects for the exhibition were lent: Map Collection of Charles University, National Technical Museum, City Museum Chrast, Museum of the City of Prague, Royal Canonry of Premonstratensians in Strahov, private collectors and others.

The exhibition will be accompanied by video presentations on globe production and a 3D model.

Organized by: Central Bohemian Museum in Roztoky near Prague in cooperation with the Faculty of Science, Charles University, Geographical Section

Exhibition in the media:

The report starts at 9:58 and you can watch it here. 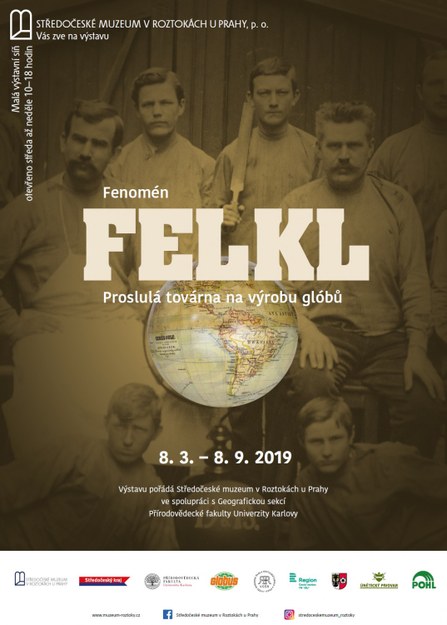