The highest priority of the Institute is to pursue process-oriented research into fundamental issues of the evolution of the Earth's crust and the biosphere in the geological past. The Institute is part of the University center of excellence (UNCE) Center for Geosphere Dynamics and has established a vigorous international collaboration. Great emphasis is also placed on presenting research results in highly ranked international journals (see Publications) and on the active involvement of both undergraduate and graduate students in research projects.

The Continental Tectonics Group examines a wide range of topics including mechanisms of magma  transport and deformation in the Earth's crust, volcanic processes, tectonometamorphic development of active continental margins and collisional orogens, dynamics of accretionary wedges, and rock magnetism and the magnetic fabric of geological bodies.

A joint research programme with the Czech Technical University in Prague concentrates on the modelling of geological processes, such as rotation of crystals in magma, cooling of magma bodies, caldera collapse, and basin development. A characteristic feature of our research is a combination of modern field Geology and advanced analytical methods, especially anisotropy of magnetic susceptibility (AMS), electron back-scattered diffraction (EBSD), computer-aided image analysis, U–Pb Geochronology, Petrology, and Geochemistry.

The Sedimentary Geology and Paleoclimatology Group concentrates on the development of sedimentary basins and sedimentary processes, as well as on Palaeogeography and Stratigraphy with a special emphasis on Late Palaeozoic and Cenozoic basins in the Bohemian Massif. To characterise sedimentary processes and environments, we use modern methods, including analysis of facial architecture, Sequence Stratigraphy, and high-resolution stratigraphic correlation integrated with U–Pb Geochronology. Other research targets include sediment provenance and Geochemistry, which are used  as a proxy for interpretation of palaeoclimatic changes.

The Palaeontology and Paleobiology Group embraces a broad spectrum, ranging from Micropalaeontology and Palaeozoology (including Vertebrate Palaeontology) to Palaeobotany. Our main goal is to understand the evolution of  life on planet Earth as a prerequisite for understanding the current state of the biosphere and for predicting its development in the future. A key element of our research are interdisciplinary studies dealing with Biostratigraphy, Palaeoecology, Taphonomy, analysis of evolutionary changes from fossil assemblages, functional morphology, analysis of biomineralisation and ultramicrostructures of fossil organisms, mass extinctions, and climate changes from palaeopopulation analysis. Our synthetic studies also examine interactions of biological, chemical, and physical processes in the fossil record and connect Palaeontology with Geochemistry, Eventostratigraphy, Climatology, Sequence Stratigraphy, and Geobiology.

The Langhian Mediterranean–Paratethys enigma: hydrography based on Nd isotopes proxy on foraminifera revealing changes in paleoceanography

The closure of the Indian–Mediterranean gateway during the Langhian is related with crucial Neogene climatic changes such as the Monterey event, which affected the whole Mediterranean area that spread across several continents. The Mediterranean–Paratethys marine system representing the junction between two oceans is the key area, which experienced important paleoceanographical changes linked with the above mentioned events. The main goal of this project is to provide a global model of oceanographic interactions within the Mediterranean–Paratethys marine system based on innovative geochemical proxies on foraminifera such as high-precision 143Nd/144Nd analyses together with foraminiferal elemental ratios: Mg/Ca, V/Ca, Li/Ca, B/Ca, Ba/Ca and stable isotopes of carbon and oxygen. These geochemical proxies jointly with classical paleoecological and sedimentological approaches should elucidate the origin and evolution of the Mediterranean–Paratethys hydrography in relation to adjacent oceans as well as assess the influences of the global climatic changes and the role of local source variations.

The Urals: a unique natural laboratory of crustal growth and supercontinent assembly

The bilateral Czech–Russian project (in collaboration with the Moscow State University) is focused on global plate-tectonic reconstruction of mechanisms and time scales of the Pangea supercontinent amalgamation in Late Palezoic on the basis of a detailed correlation and synthesis of geodynamic evolution of the European Variscides and Uralides and their postcollisional reactivation. Due to the relative scarcity of modern geologic data, most of the field and analytical work will be pursued in the Urals, where three E–W transects across the orogen will be thoroughly documented in terms of structure /tectonics, magmatism, high-precision geochronology (using LA-ICP-MS and TIMS), paleomagnetism, and biostratigraphy. This complex multidisciplinary approach will allow to decipher the evolution of the Uralides in a great detail, including paleotopography and marine transgression–regression cycles. The new data will be merged with the existing data from the Bohemian Massif and European Variscides and integrated into a global-scale synthetic geodynamic model. 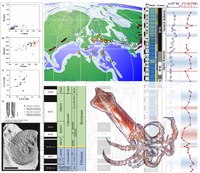 The conceptual approach of proposed research comprises acquisition and evaluation of new geochemical data for the global definition of the Jurassic–Cretaceous boundary in marine environment, their integration with high-resolution magnetostratigraphy, biostratigraphy and sedimentology, and correlation of new and previously studied sections in the multi-proxy mode. The integrated-stratigraphy database will be created. Classic key-sections, such as Kurovice (Czech Republic) and Brodno (Slovakia) will be supplemented by new sections: Snežnica (Slovakia), Rettenbacher (Austria), Silesian Unit (Goleszow, Poland) and Golubac (Serbia). The research will be carried out in cooperation with the International Subcommission on Cretaceous Stratigraphy. Aims of project:  acquisition of new geochemical data by integrated high-resolution multi-proxy research and  reconstruction of palaeoenvironmental changes on the Jurassic–Cretaceous transition.

Cherts and carbonates represent widespread members of Ocean Plate Stratigraphy (OPS) from the Archean to present. Their composition reflects different conditions during their deposition, which can be potentially linked to the contrasting and temporally changing processes that occurred on moving oceanic plates. Additionally, they also provide unique insights into the compositional variations in seawater chemistry and temperature as well as redox conditions of their depositional environment. The project is a multi-technique study combining tectonic, structural, and stratigraphic observations with elemental and isotopic (Hf–Nd–Mo–Si–C–O) data to reveal the origin and nature of chert and carbonate successions in ancient OPS sections and test whether they can be used as geochemical proxies for the variable processes occurring on oceanic plates. The project will also contribute to our understanding of paleoenvironmental conditions during the late Proterozoic–Cambrian with implications for global events preceding and synchronous with the Great Cambrian Explosion of life. 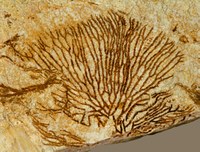 Pterobranch hemichordates are very abundant in the Lower Paleozoic marine sediments.Their fossil record documents that they flourished for more than a hundred million years. Planktic forms, belonging to Graptoloidea, attract attention because of their stratigraphic significance as index fossils. On the other hand, sessile benthic colonial pterobranchs are insufficiently studied taxa despite their potential for broad applications in paleoenvironmental and paleoecologic models, which play a significant role for paleogeographic reconstructions of temperate as well as tropic paleoareas. A study of various diversity, disparity, evolutionary, functional morphologic, taphonomic and paleoecologic aspects is an essential basis for wide-ranging applications of this group in paleobiologic and geologic models. The project is designed for such model studies of selected primary sessile pterobranchs based on selected taxa from different regions, particularly from the Prague Basin (Barrandian).

How precisely can we reconstruct Carboniferous tropical forests?

The project is a multi-methodical study of the Carboniferous wetland tropical forest from the view point of its diversity, spatial and temporal heterogeneity, ecological characteristics of plant taxa, their relationship among species of the ecosystem including animal–plant interactions. The study will profit from unique fossil record from superb localities in the Czech Republic and north China, where the wetland tropical forest was buried in situ by volcanic ash (“Carboniferous Pompeii”). Plants are preserved in place of their growth and mode of preservation allows combination of external morphology with anatomy resulting in improvement of whole plant reconstruction as well as of understanding to their physiology and growth strategy, which, in turn, improves our understanding of role of plant species within the ecosystem. Combination with mesofossil and palynological (both dispersed and in situ) studies will provide additional information on diversity of the Carboniferous forest and statistical evaluation of data will enable to generalise obtained results. As a result, we will provide a detailed reconstruction of autecology and synecological characteristics and “behaviour” within the Carboniferous tropical coal forest ecosystem, its structure, diversity and spatiotemporal variability in relationship to environmental changes.

This multidisciplinary project addresses the issue of petrogenesis, emplacement processes, and tectonic setting of Late Archean (ca. 2.9–2.6 Ga) granites in the Bienville subprovince, NE Canada. In particular, the project concentrates on analysis of fabric and architecture of selected plutons, numerical modelling of associated crustal strains, determining high-precision radiometric age using laser ablation ICP-MS and ID-TIMS and geochemical composition including trace elements and Rb–Sr, Sm–Nd, and Hf isotopes. The obtained data will be used to interpret the thermal and mechanical conditions in the host rock during emplacement, durations, tempos, and spatial and temporal patterns of plutonism. These interpretations will serve as a basis for a general discussion and testing the hypothesis whether the Late Archean granites record plume-dominated vertical tectonics or whether they record modern-style motions of lithospheric plates.