Our research on the geographical variability of the song of the Yellowhammer started already in 2011, when a citizen-science project mapping the distribution of different dialects (the terminal syllables shared by all local males) in the Czechia was launched (http://strnadi.cz). The project is still ongoing. Since then we "expanded abroad", though. The project in the native range (the UK) and in the (New Zealand) explored, what happened with the dialects after 140 year of isolation (http://yellowhammers.net). Yellowhammers are also recorded in Poland, Switzerland, and to a lesser degree in Latvia and Croatia. In the Czech Republic we explore not only the dialects, but also the variability in the initial phrase, which seem to be individually specific. We also perform field playback experiments to assess the relevance of the dialects in specific contexts.

Research on ecology of Tree and Meadow Pipits started long time ago, already around 1997 during Tereza’s undergraduate studies. Since then the Tree Pipit (Anthus trivialis) became one of our main model species for studying various aspects of singing behaviour. Apart from territorial defence, since 2002, we also focus on long-term changes in song structure of several Tree Pipit populations and its geographic variation. One of the populations is continuously studied since 2011, and our research there revealed that Tree Pipit males poses individually distinct repertoires. We are thus able to identify males only based on recordings of their song, and this has been later validated also in other populations. Individual acoustic monitoring is more effective for studying territorial dynamics or assess return rates than traditional methods (ringing), and it also allows us to analyse direct natural interactions among singing males and reveal the function of some specific song structures (trills).

Cultural evolution of birdsong in time and space

Songs of oscine songbirds are among most studied examples of animal social learning. Although various studies have described intraspecific song variation in space or over time, only a few (all on a single genus with a simple song) examined these aspects jointly. We explore intraspecific geographic and temporal variation of songs of four Pipit species: Tree (Anthus trivialis), Meadow (A. pratensis), Tawny (A. campestris) and Berthelot’s (A. berthelotii). Their songs are of different song complexity, and they also differ in migration behaviour. Our aim is to reveal mechanisms contributing to cultural evolution of their songs. Our key hypothesis is that different social learning biases influence the cultural evolution of specific structures in complex songsters, and that these patterns differ from related species with simple songs. Furthermore, we plan to test effects of migration strategies on song characteristics in conspecific populations and congeneric species, and impacts of population isolation and colonization history in an island taxon. With unified approach across time, space and multiple species we hope to improve insights of song cultural evolution. 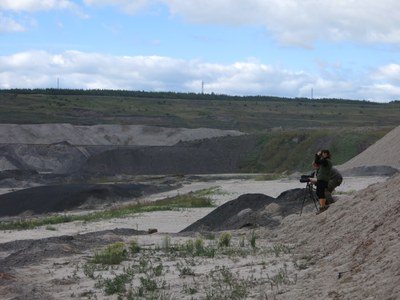 The project started as a study of the function and evolutionary meaning of mixed singing, a skillful song copying of the Common Nightingale (Luscinia megarhynchos) by the Thrush Nightingale (Luscinia luscinia). Following the pioneer work of Jana Vokurková and Jiři Reif in Poland, we first tested the territorial response of Common Nightingale to pure and mixed singing using playback experiments. Several collaborations with local, as well as international labs, allow us to explore other aspects: the function of mixed singing as a post-zygotic barrier between our hybridizing birds (with Radka Reifová, Department of Zoology), the enigmatic occurrence of Thrush Nightingale singing in Tanzania during wintering period (with Nicole Geberzahn, University Paris-Nanterre-La Defense) or the geographical variability of song repertoire at the species’ range scale thanks to historical recording data bank  from collaborations in Russia (with Vladimir Ivanitskii & Irina Marova, Lomonosov University of Moscow) and more recently Finland (Jorma Sorjonen & Jari Valkama, Natural History Museum of Helsinki).

Since late 19th century, European forests were enriched by new introduced species of deer, of which the most invasive are sikas (Cervus nippon), which threaten the genetic integrity of red deer (Cervus cervus) through hybridization. In 1998, Long et al. demonstrated that the hybrids have an intermidiate vocalisation during the rut and can be, therefore, identified by sound. Inspired by a work by Long et al. (1998) we set-up a citizen-science project to record audio recording of deer vocalisation during the rut to map the distribution of red and sika deer hybrids in Czechia. The key person is Monika Nečasová, for whom the project is main part of her master thesis. Czech website is here: http://hlasyjelenu.cz