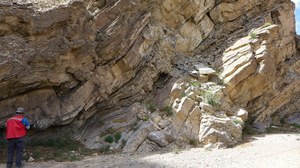 The growth of eastern Pangea involves three contrasting orogenic cycles: 1) Baikalian cycle (570-540 Ma) consists of accretion of peri-Rodinian continental, Mirovoi and Panthalassan oceanic fragments to the Siberian margin followed by extensional HT reworking, the growth of magmatic arc, giant accretionary wedge and intraoceanic basin. 2) Altai cycle is typified by crustal thickening followed by syn-extensional melting of the accretionary wedge (420-380 Ma) and the opening of Mongol-Okhotsk ocean. Cycle terminates by the growth of migmatites domes (370-340 Ma), thrusting of intraoceanic ophiolites and relamination of molten material beneath oceanic crust. 3) Paleotethysian cycle (300-220 Ma) is represented by oroclinal buckling of the hybrid oceanic lithosphere. The Baikalian cycle is related to advances and retreats of Panthalassa ocean. Altai cycle results from dynamically advancing and retreating subduction of young and hot Rheic type ocean beneath Pacific one. This hot, weak and hybrid lithospheric segment was shortened and incorporated into Pangea supercontinent. The main goals of the project are 1) Characterize orogenic cycles using a multidisciplinary approach. 2) Understand and model mechanisms of formation of hybrid oceanic lithosphere resulting from subduction of a hot interior ocean. 3) Proposing a mechanistic model of incorporation of this lithosphere into the Pangea supercontinent. 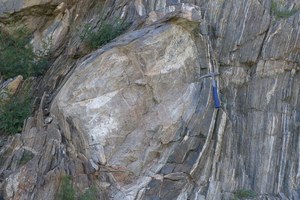 Since the late Proterozoic to Permian times accretionary systems developed at periphery of a palaeo-Pacific ocean. At the same time formed giant Central Asian Orogenic Belt (CAOB) being located inside the NE part of the Pangea supercontinent. This orogen thus reveals features of both peripheral and interior orogens. In this project it is proposed that the CAOB precursor evolved at the periphery of paleo-Pacific, was later transferred into the interior of the Pangean continental realm and finally bended and shortened between Siberian and North China cratonic jaws. Multidisciplinary approach is proposed to characterize final orogenic architecture of Mongolian tract of CAOB and define boundary conditions and timing of both accretionary and collisional cycles. An attempt is made to understand evolution and redistribution of orogenic lower crust during advancing and retreating subduction and subsequent oroclinal bending by geophysics and analogue/numerical modelling. The main goal of the project is the development of a continental growth model exemplified by the Pangea supercontinent formation by characterization of: 1) primary oceans of Mongolian CAOB, 2) time scales and mechanisms of their transfer into "interior" continental position and 3) processes of their transformation into continent.

It is well known that the inherited architecture of extended continental margins controls the collisional processes and deformation structure of ensuing orogens. However, the classical hyper-extended margins of the Atlantic type differ substantially from the extended continental margins above the west-Pacific subduction systems, which are characterized by massive crustal melting, intrusion of large portions of mafic magmas and HT-LP metamorphism. In this project, we focus on a Pacific type hot margin developed during Ordovician times along the northern margin of Gondwana and was subsequently incorporated into the Devonian subduction-collisional structure of the western margin of the Bohemian Massif. We rely on a multidisciplinary approach combining geological and geophysical methods to characterize the architecture of such an orogen and propose its evolutionary thermomechanical model which will be tested by means of numerical modelling.

Melting of the crust leads to granitic magmas that vary widely in composition and in ability to generate metal deposits or cause explosive volcanism. A number of superposing, competing processes control this variability. Much has been learnt from investigating processes late in the magma history, but not much is known about magma generation at depth and what happens to it during transport to the upper crust. Indirect knowledge or inferences based on little data, leads to speculation and controversies. This project aims to better understand the early history of granitic magmas from the time they are generated at depth to when they are delivered to magma chambers in the upper crust, impacting on our understanding of granitic rocks.

The goal of the present proposal is understanding of the deformation mechanisms and melt porous flow in the orogenic felsic lower crust during the continental collision. These processes play a significant role for the architecture development and collision dynamics of orogens, where partially molten rocks of the orogenic „infrastructure“ mobilize in response to the pressure gradients and extrude along the suture zones of colliding blocks. The processes of melt softening and melt transfer in the orogenic infrastructure will be studied from microstructural and petrological record of anatectic orthogneisses of the Eger crystalline unit. The successful outcome of the project requires combination of structural mapping, thermodynamic modeling, complex microstructural analyses, geochemical analyses and zircon and monazite crystal dating. 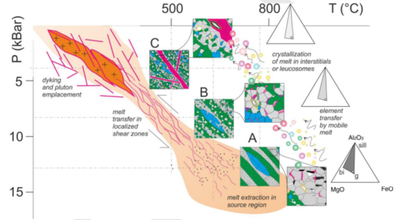 Mechanisms related to crustal thickening and lower crustal redistribution in the Bohemian Massif will be investigated by answering following questions: 1) How can be discriminated crustal thickening from subduction metamorphic records? 2) What is the time scale of subduction event, superstructure thickening and infrastructure lateral redistribution? 3) What drives the horizontal redistribution of orogenic infrastructure? The first two questions will be realized via petrological, Ar–Ar geochronology and structural studies of the Teplá-Barrandian domain, and by construction of prograde metamorphic gradients in HP granulites and gneisses and Lu–Hf, and Sm–Nd dating on prograde garnets in the Moldanubian domain. The third question will be solved by mapping of zircon ages across the granulite massifs, modelling of dissolution-crystallization of zircons and by quantitative petrological analysis of HP granulites, eclogites and mantle interactions. The mechanical coupling between the superstructure and infrastructure during thickening and lower crustal flow will be numerically modelled.

Proposed project deals with a determination and quantification of an internal deformation fabric in selected massifs of upper mantle rocks by a measurement of the lattice preferred orientation of olivine, orthopyroxene and clinopyroxene using EBSD method and quantitative microstructural analysis. The project is continuation of previous studies carried out on a high-temperature crustal rocks that surround upper mantle rocks in the internal orogenic zone of the Bohemian Massif. Further microstructural and petrological investigation of lower crustal rocks is proposed in localities that have not been studied yet in detail. New and previous data will be used for evaluation of rheological behaviour and degree of strain coupling of studied lithologies. New and previous data will be used to compare geometry and microstructure of mantle and surrounding crustal rocks in order to evaluate rheological behavior and degree of strain coupling of both lithologies. Additionally, a model of emplacement of mantle rocks into granulitized crust will be proposed.

The Gemer and Vepor units in the Central West Carpathians represent an excellent example of the superstructure-infrastructure tectonic relationship. This is demonstrated by the record of the older upright structures in the Gemer superstructure developed during crustal thickening and of the younger gently-dipping structures in the Vepor infrastructure developed during subsequent lower-crustal ductile flow. Recently, we have demonstrated that the orogen-parallel flow in the Vepor Unit is associated with the prograde metamorphism indicating up to 4 kbars and 400 °C P-T increase. In our concept the orogen-parallel horizontal ductile flow in the Vepor infrastructure is not associated with thermal weakeninig and bouyancy driven syn-exhumational crustal upflow, but relates to metamorphic-rheological weakening of the Veporic crust induced by the overthrusting Gemer Unit. The role of transient rheology on dynamics of continental tectonics exemplified by Cretaceous collision in the West Carpathians needs to elucidated.