We are a group of young geoscientists (including some young souls trapped in aging body) using the field-, experiment- and modeling-based approach to investigate the magma evolution from its source in the Earth’s crust or mantle to its final intrusion or eruption. Our research interests cover variable aspects of igneous petrogenesis ranging from magma generation, through transport, differentiation and emplacement to its final solidification as well as the study of the pre- and syn-eruptive conditions and processes of active volcanoes. We employ broad scale of methods from fieldwork and conventional petrography through major- and trace-element and isotope geochemistry, numerical modelling and laboratory experiments.

This innovative project aims, for the first time, to define the role of the oxygen fugacity on the partitioninals, dug behavior of the Highly Siderophile Elements (HSE), how they are incorporated in mantle minerring mantle melting and crystal-liquid fractionation, and how their bulk partition coefficients change with changing redox conditions. The redox state has a critical effect on the partitioning behavior of the highly siderophile elements during mantle melting. This has had long-term effects on planetary differentiation not only for the Earth, but also for the extraterrestrial bodies. This study will improve both the knowledge of the geochemical behavior of these elements during mantle melting and magma genesis, that the knowledge of differentiation processes in extraterrestrial systems, where the redox conditions are more reduced than those of the Earth, such as the Moon.​ 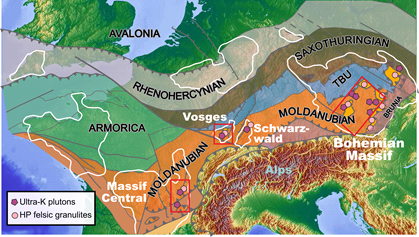 Deep subduction and relamination of felsic continental crust rich in radiogenic elements have far-reaching consequences for the thermal state and rheology of the orogenic lithosphere as well as mantle enrichment processes. The project proposes an integrated study of petrology, geochemistry and Sr–Nd–Pb–Li–O–Mg–Cr isotopic systems in Early Carboniferous ultrapotassic plutons, related to deep subduction of continental crust, in Bohemian Massif, French Massif Central and Vosges. This study should provide pivotal information about mantle and crustal sources of parental magmas in the Variscan orogenic root (Moldanubian Zone) and their further evolution. In turn, these data represent a key input into any large-scale model aimed at explaining the geotectonic development of the European crust and lithospheric mantle. More importantly, the proposed research should improve our understanding of the nature and genesis of ultrapotassic magmas with peculiarly mixed mantle–crustal signatures, as well as the general geotectonic development of younger collisional orogens, e.g. Andes or Himalayas.