History of the Library

1885: One borrowed cabinet for geographic manuals placed in the corridor of the Institute of Geography in Spálená Street in Prague. Donations and exchanges formed the foundation of the acquisitions. The library was primarly supported by the natural science and history clubs. Duplicates were also regularly sent from university and public libraries in Prague. The first librarian, Prof. Václav Švambera, performed the work of the head librarian and archivist on a volunteer basis.

1920: The Faculty of Science was separated from the Faculty of Arts and Philosophy. The east wing of the building at Albertov 6 was finished and therefore the Geography Department got spaces for a specialised library.

2005: The library underwent extensive reconstruction. The total library area in the open part of the collection was enlarged to 200 m2 and access to the galleries was provided. Readers have access to 752 m of books  in the open access collections.

2006: Start of the revision of the collection, which had not been performed in the library during the previous forty years. The new depository placed in the basement of the building underwent reconstruction. Electric compact shelves were installed and all periodicals were moved from their existing depositories. Part of the old collection was also placed there.

2009: Reconstruction of a work room and of an old depository in the basement. Electric compact shelves were installed there. 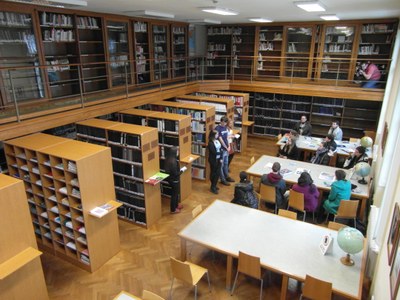