Exhibition: Map of the Kingdom of Bohemia, 1720

We cordially invite you to the exhibition Map of the Kingdom of Bohemia, 1720. The exhibition presents the life and work of the Austrian military engineer and cartographer Johann Christoph Müller (1673–1721), whose so-called large map of Bohemia under the title Mappa geographica Regni Bohemiae was published 300 years ago. The exhibition was already created in 2020, but was not available due to the coronavirus measures, so we are making it available to the public again.

Johann Christoph Müller - Map of the Kingdom of Bohemia, 1720 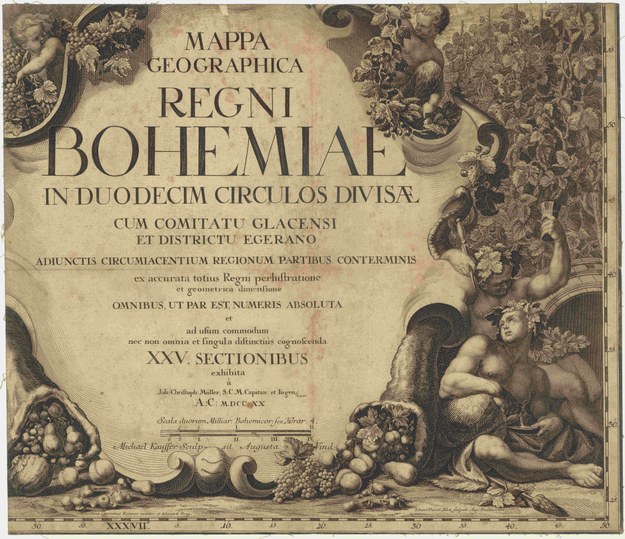 The Department of Geography of the Faculty of Natural Sciences of Charles University, the Map Collection and the Geographical Library are organizing the exhibition Map of the Kingdom of Bohemia, 1720.

The exhibition presents the life and work of the Austrian military engineer and cartographer Johann Christoph Müller (1673–1721), whose so-called large map of Bohemia under the title Mappa geographica Regni Bohemiae was published 300 years ago.

Mapping took place gradually. Müller first targeted and drew Hungary, then Moravia, and in 1712 he started with a large map of the Kingdom of Bohemia. He completed field work in 1718. He laid out the map on a scale of 1:132,000 into 25 sections. The 48 map markers in the legend indicate not only towns, villages and monasteries, but also mines, glassworks or, for example, mills. He also recorded mountain ranges, watercourses and ponds. Changes in the land system were reflected on the map, when in 1714 the country was divided into 12 regions.

After the completion of Müller's work in 1720, the Bohemian estates commissioned Augsburg master Michael Kauffer to engrave the map on copper plates. The corner illustrations of the map were originally designed by the well-known baroque painter Václav Vavřinec Reiner.

Unfortunately, the author did not live to see the publication of the work in 1722. 48-year-old J. Ch. Müller died a year earlier of work exhaustion. His work was continued by Lieutenant Johann Wolfgang Wieland, who completed revisions of the printing plates of the large map. He then reduced the work to the form of a so-called medium map at a scale of 1:231,000.

The copper matrices of the map of Bohemia have been preserved to this day in the National Technical Museum in Prague. In 1934, reprints were even printed from them for the edition of old maps published by the then Institute of Geography of Charles University under the title Monumenta cartographica Bohemiae. The edition was led by university professors Václav Švambera and Bedřich Šalamon. Visitors can see the reconstruction of the monumental new print in the side corridor on the 2nd floor, where this large map is installed.

A video documentary was filmed about the renovation of this map, which took place at the Faculty of Science from May 2019 to June 2020, which can be viewed on the You Tube channel of the Map Collection.

In addition to the large and medium maps, the exhibition also presents a map of Cheb region (Egerland) and its manuscript from 1714. Maps of Moravia and Hungary are also on display.

Müller's large map was secret. The emperor gave his approval for free sale, but until 1805 its sale was controlled and authorized only by the gubernatorial presidium.

Müller's map was then used practically for the next 100 years. After the Seven Years' War (1756-1763) it was measured again in Bohemia. The basis of the first military mapping (1764-1767) was once again Müller's map enlarged to a scale of 1:28,800. The officers drew on it using the "á la vue" method, i.e. by simply observing the terrain, roads, bridges and especially the land border. From this mapping, however, the sheets of the entire country never came out as a whole. That is why the military leaders of all warring parties used Müller's and Wieland's maps even during the Napoleonic Wars. A new edition was not considered at the time, as everyone believed that the printing plates had been destroyed.

Visitors to the exhibition can view copies of Müller's maps from the Map Collection of the Faculty of Sciences, CU, as well as examples of printing plates from the National Technical Museum. A copy of the manuscript index to Wieland's Central Map of Bohemia was kindly provided by the Central Archives of Land Surveying and Cadastre.

The exhibition was created already in 2020, but in connection with the coronavirus measures, it was not available to the public.

The exhibition is traveling.