Research in the Laboratory of RNA Biochemistry is focused mainly on the control of both cap-dependent and cap-independent translation initiation in the context of various models of eukaryotic cell. Both bioinformatics as well as wet-bench methods are applied. The Laboratory has also built and currently administrates two public bioinformatical databases: http://iresite.org/  and http:/hcvivdb.org.

The current scientific interest is in three main topics:

Ribosomal recruitment to the messenger RNA becomes consequentially an elective regulatory target. A rate-limiting event and established site of control, initiation is orchestrated by several factors which ultimately direct ribosomes to capped mRNAs. In eukaryotes, the 5’-cap structure (m7GpppN) is recognized by the translation initiation factor eIF4E1.

Metazoans evolved several paralogous eIF4E genes that encode distinctly featured proteins, many of which are involved in the preferential translation of particular mRNAs or are tissue- and developmental stage- specific. Besides eIF4E1, the members of class 2 (eIF4E2, 4EHP) and class 3 (eIF4E3) of the eIF4E protein family are encoded by the human genome.

We carried out a bioinformatic analysis of eIF4Es´ transripts and found out that each protein is encoded by several distinct transcript splice variants. We focused on 3´- end mRNA heterogeneity and predicted new polyadenylation sites. 3´-RACE experiments then confirmed utilization of multiple polyadenylation sites, what resulted in a generation of mRNAs with different 3´-termini (Mrvová et al., 2017; submitted). We cloned cDNAs of selected transcript variants of eIF4E genes and created fusions of their coding sequences with GFP coding sequence. Then, we generated stable cell lines allowing inducible expression of eIF4E1, eIF4E2, and eIF4E3 proteins, respectively. We were interested in cellular localization of eIF4E2 and eIF4E3 proteins. We discovered a unique presence of eIF4E3 in Stress Granules and their complete lack in P-bodies. We also identified eIF4E2 in Stress Granules of heat-shocked cells (Frydrýšková et al., 2016). Employing GFP-TRAP technology we performed a search for unrevealed protein interaction partners. We also identified a subset of mRNAs that are specific for each individual eIF4E protein by NextGen sequencing.

Certain RNA viruses infecting eukaryotic cells utilize yet another mechanism to initiate protein synthesis. The translation initiation process is independent of the cap presence and the specific sequence regions ensuring this type of initiation were termed Internal Ribosome Entry Sites (IRESs). IRES sequences were also found in some cellular mRNAs.

Our Laboratory currently studies IRES of Hepatitis C Virus (HCV). Very well characterized HCV IRES serves as paradigm for IRES-driven cap-independent translation initiation. Simultaneously, HCV infection causes serious health problems as WHO considers the hepatitis C to a ticking “viral time bomb” and estimates the number of the infected individuals to be 200 million people of the world’s population. An inhibition of IRES functionis one of the promising strategies to block HCV life cycle.

Several years ago, we established the IRESite database (http://iresite.org/) which is currently the only active scientific database on IRES structures and experiments (Mokrejš et al. 2006, 2007, 2010). More recently, we also focused on the structural configuration of the different HCV IRES domains and the impact of IRES primary sequence variations on secondary structure conservation and functions (Khawaja et al., 2015). In parallel, we started up a HCVIVdb – HCV IRES Variation database (http:/hcvivdb.org) which stores naturally-occurring as well as artificial mutations of the HCV IRES sequence and corresponding experimental details; see also Floden et al., 2016. We built a yeast-based reporter system which allowed us to detect and study activity of the hepatitis C IRES in yeast (Mašek et al., 2007). Now we are developing and optimizing a reporter system based on HCV IRES-containing bicistronic vectors suitable for screening of the library of pre-selected bioactive chemical compounds with the aim to find an inhibitor or modifier of HCV IRES translational activity.

The last research intent is focused on unique system of linear plasmids naturally-occurring in the cytoplasm of yeast Kluyveromyces lactis. Both plasmids, called pGKL1 and 2, bear 15 genes, many of them encoding either ascertained or putative proteins implicated in direct regulation of transcription and cap synthesis. We explore the mechanism how the 5´- and 3´-ends of transcripts are generated and try to find out what is the mechanism of their translation.

Interleukin-1α (IL-1α) is a proinflammatory cytokine and a key player in host immune responses in higher eukaryotes. IL-1α has pleiotropic effects on a wide range of cell types, and it has been extensively studied for its ability to contribute to various autoimmune and inflammation-linked disorders, including rheumatoid arthritis, Alzheimer’s disease, systemic sclerosis and cardiovascular disorders. Interestingly, a significant proportion of IL-1α is translocated to the cell nucleus, in which it interacts with histone acetyltransferase complexes. Using a gene knock-out technique and co-immunoprecipitation of the IL-1α precursor with TAP-tagged subunits of the yeast HAT complexes, we mapped the IL-1α -binding site to the HAT/Core module of the SAGA complex. We also predicted the 3D structure of the IL-1α N-terminal domain, and by employing structure similarity searches, we found a similar structure in the C-terminal regulatory region of the catalytic subunit of the AMP-activated/Snf1 protein kinases, which interact with HAT complexes both in mammals and yeast, respectively (Zámostná et al., 2012). Our experience in cytokine signaling and corresponding transcriptional regulation is also documented elsewhere (Vicenová et al., 2009, Burýšková et al., 2004). 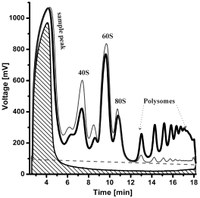 uring the past years when we studied a cap-independent translation initiation, we also published several methodological articles improving RNA research technology. We found that the frequently used reporter gene – the firefly luciferase – contains a cryptic promoter. This finding has an important impact on IRES-related experiments interpretations (Vopálenský et al., 2008, Mašek et al., 2013). We also improved a method of polysomal profile analysis, which is described in the dedicated book chapters (Mašek et al., 2011, Pospíšek et Valášek, 2013). In 2005, we published a substantially simplified protocol for RNA agarose gel electrophoresis (Mašek et al., 2005). This paper was awarded by Elsevier Press as one of the most full-text downloaded publications of Analytical Biochemistry journal in the last several years.

Department of Genetics and Microbiology