This practical course is aimed at senior undergraduate and postgraduate students. It is intended to: a) explain fundamentals of data processing and visualization in geology as well as functioning of computing algorithms in general; b) present basics of the R and Python programming languages; c) illustrate the usability and versatility of both languages for everyday calculations, as well as for production of publication-quality graphics; d) demonstrate examples of using both languages in reproducible research (with certain structural geology and whole-rock geochemistry bias).

This course is focused on petrological and compositional variability of igneous rocks as well as petrogenetic processes playing role in their origin (partial melting of various source rocks, relations between compositions of the melt and co-existing crystals during melting and crystallisation processes, fractionation and contamination of magmas). Addressed are peculiarities and petrogenetic problems of selected rock types and suites in individual geotectonic settings. Particular emphasis is on practical exercises demonstrating the techniques commonly employed in graphical presentation and interpretation of major- and trace-element whole-rock geochemical data as well as radiogenic isotopic compositions.

Advanced course in geotectonics and lithosphere-scale deformation processes designed for graduate students in structural geology, petrology and geology. Main subjects of the course are evolution of oceanic and continental crust, heat flow within the lithosphere, mechanical properties of the lithosphere, metamorphism of orogenic and subduction domains, and rifted realms and orogenic belts.

Basic topics which will be discussed in this class are as follows: (i) physical processes in magma chambers, (ii) interpretation of fabric patterns in plutons, (iii) emplacement mechanisms. First part of the class will be focused on physical properties of magmas and the most important physical processes operating in magma chambers (e.g. mixing and mingling, convection, gravity-driven processes, magma flow) whereas the second part will be aimed at interpretation of fabric patterns in plutons, rheology of fabric formation and relationship between fabrics, strain and stress fields, including introduction to AMS technique. We will explore issues related to emplacement mechanisms of granitoid magmas to the middle and upper crust as well as "hot topics" - relationship between faults and plutons, stoping or granitic diapirs. Lectures will be followed by short practicals and discussions as well as by one-day field trip to the Central Bohemian Plutonic Complex at the end of summer term.

MG440C77 - Methodics of Preparation of Bachelor and Diploma Thesis

[ONLY CZECH SO FAR] The practical course dedicated to methodology on compilation of bachelor/diploma thesis or other scientific/technical reports. The practical tasks will be demonstrated using the freely accessible software (open source).

In 2007-2020 I have been  editor in chief of an open-access Journal of Geosciences, published by the Czech Geological Society with support of the Czech Geological Survey. It is focussed on all aspects of nature and origin of igneous and metamorphic complexes. The Journal is indexed by Web of Science, Scopus, ProQuest, Geobase, GeoRef, and EBSCO. It is also member of the CrossRef association and the Geoscience e-Journals webring. 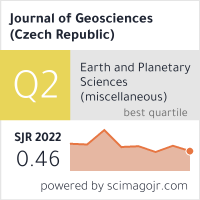 For further info, see our blog.

Moreover, in 2016 we have published a Springer monograph  Geochemical Modelling of Igneous Processes – principles and recipes in R Language, explaining the use of the R programming language and the GCDkit system in  whole=rock geochemistry based modelling of igneous petrogenesis. 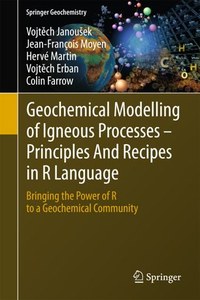