Pavel Aretin of Ehrefeld: A map between the defenestration and the Battle of White Mountain

The exhibition will present the life and work of Pavel Aretin of Ehrenfeld, whose map entitled Regni Bohemiae nova et exacta descriptio ie New and Accurate Description of the Kingdom of Bohemia (published 1619, 1632, 1665, before 1747) was published for the first time 400 years ago. It was made by engraver Pavel Bayard. In contrast to the previous maps of Bohemia by M. Klaudyán and J. Criginger, the work first captures the boundaries of 15 provincial regions with Czech and German names. Also the scale of the map was already more detailed 1: 504 000. He added a topographic alphabetical index with coordinates in Czech miles referring to 1157 geographical names. Due to the war use of the map, very few copies have been preserved. The original perhaps the first edition is owned by the National Archive, which kindly made a copy available for the exhibition. Another edition from the time of the Saxon invasion of Bohemia from 1632 belongs to the collection of the Map Collection of the Faculty of Science, Charles University. Other editions were made with minor modifications from the same printing plate, but without the name Aretinova, which apparently became undesirable. The new publishing house became the Prague publishing house of the Wussin.

Cartometric analyzes were performed on the exhibited cartographic monuments. Thanks to them, the scale of Aretin's map was refined at 1: 543 580. A unique model was created to search for places from Registrup according to the instructions at the edge of the map.

Topographically, Aretin specified 16 map markings that indicated the administrative character and the location of precious and useful metals. The borders are decorated with 12 period characters from various social groups of the population, from the Barons and their wives to men and women from the people. These are highly appreciated by ethnographers.

Sister maps from the British Library by W. P. Zimmermann or E. Sadeler will also be introduced, as well as derived maps, mostly from the atlases of the Map Collection of the Charles University. A new map of the Czech Kingdom then appeared almost 100 years after Aretin, in 1712, by the Cistercian Plasy Mauritius Vogt.

The exhibition will also include historical posters setting the work within the framework of the stormy Thirty Years' War, from defenestration (1618), through the Battle of White Mountain to the looting of Prague by the Swedes in 1648. Visitors will also be able to see images musketeer suit with armament. 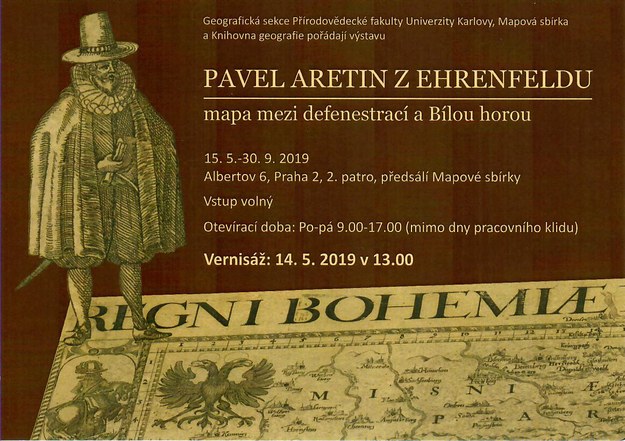