Now you can visit the latest exhibition "Institute of Geography 1920-1940: they were the first" in the foyer of the Map Collection of Charles University. The exhibition is open from September 22, 2020 to December 31, 2021. 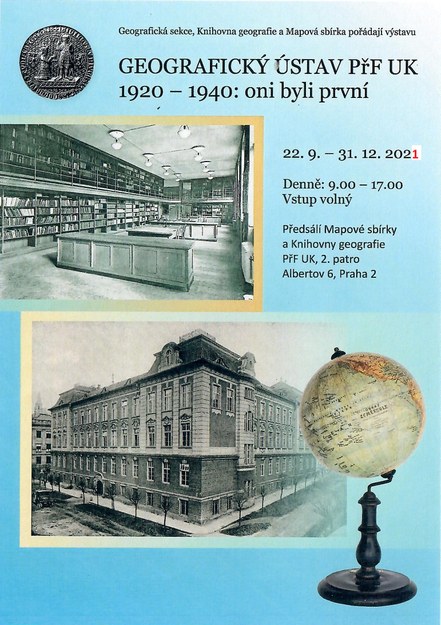 The exhibition presents the first twenty years of the Faculty of Science at Charles University, when geography was established as a new, dynamically developing field. Twenty most notable personages who significantly influenced the face of current Czech geography and future generations of students will be presented. Among these personages, there were also three Deans of the Faculty of Science CU: Václav Švambera who led the faculty in 1923/24, Jiří V. Daneš who was the dean in the academic year 1925/26 and Bedřich Šalamon who was elected in the crisis year 1939.

Jan K. Palacký (1830–1908), who is often credited as a founding father, obtained his habilitation in the field of physical geography.

Among his excellent student was also the hydrologist, Professor Václav Švambera (1866–1939). In 1908, he became the Head of the Institute of Geography, which he enhanced to international level.

In the years 1906–1910, three future professors received their habilitation: Jiří V. Daneš (1880–1928) in general geography, Karel Absolon (1877-1960) in physical geography and Viktor Dvorský (1882-1960) in anthropogeography. Stanislav Nikolau (1878-1950), the author of most interwar high school textbooks of geography, worked here as an assistant. In 1912, the geomorphologist Daneš became an extraordinary professor.

Shortly after the founding of an independent Czechoslovakia in 1918, geographers took part in discussions about the state borders. V. Dvorský participated as an expert advisors of the Czechoslovak delegation in the negotiations in Paris.

In 1916, geomorphologist Václav Dědina (1870–1956) habilitated with his work on a cretaceous basin in Bohemia.

On June 24, 1920, the newly established Faculty of Science CU separated from the Faculty of Arts.

On November 29, 1920, the Ministry of Education and National Enlightenment established the State Collection of Maps of the Czechoslovak Republic at the Institute of Geography.

Exercises in cartography were led by Bedřich Šalamon (1880–1967), professor of mathematical geography and cartography at Charles University. The methodology of secondary school teaching was lectured by cartographer professor and the head of grammar school František Machát (1876–1935). Jiří Král (1893-1975), later a professor of anthropogeography, became a new assistant at the Institute of Geography. At the beginning of the 1920s, up to 400 students were present at the main lectures.

Alois Musil (1868–1944), a well-known Orientalist, biblist and Arabist, also lectured as an externist at the Institute of Geography CU.

In 1935, a large representative national work, Atlas of the Czechoslovak Republic, was published. The editorial board led by J. Pantoflíček included not only Albertov geographers V. Švambera, B. Šalamon and F. Machát, but also other scientists from the Faculty of Science V. Láska, A. Boháč and C. Purkyně.

The German occupation in 1939 turned into terror and lead to the closure of Czech universities. Professor Auerhan and many others were tortured to death by the Nazis.

Despite future unfavorable developments, it can be stated that the Institute of Geography CU could compare to the best foreign institutions of large nations in the late 1920s.

In addition to 60 original documents, visitors can also take a look on wall photographs of the three interwar Deans of the Charles University in Prague, which were kindly provided by Atelier Langhans. Aside from other objects, a globe made in Jan Felkl & son factory and modified by  Stanislav Nikolau in 1921 can also bee seen. A large-format (approx. 8 m2) copy of the physical map of Czechoslovakia without fixed borders by F. Leixner and M. Semík from 1920 was installed in the corridor. This map was donated by ARCData Prague. Among displayed objects there are also two canvases with photos showing the construction of the building of natural sciences at Albertov and copies of old maps from the edition Monumenta cartographica Bohemiae.

The exhibition is travelling and can be loan to other instutions.