The 2ndEARSeL SIG LU/LC and NASA LCLUC joint Workshop “Advancing horizons for land cover services entering the big data era” sets the questions towards and beyond the 2020 emerging challenges. The workshop will take place on 6-7 May 2016. 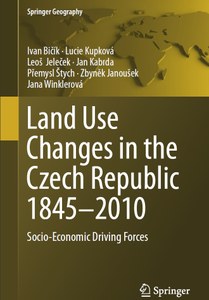 Basic terms, including “land use” and “land cover” are defined. Land use patterns are seen as a result of long-term interaction between humans and natural environment. Practical applications of land use research are discussed, namely with regard to land management and policy and land use planning. Later, the history of land use in the world is outlined. Four scientists that contributed most to land use research in the past are mentioned. First, Johann Heinrich von Thünen, who formulated the intensity theory and theory of crop zones. Second, Karl Marx, author of the term “differential ground rent”. Third, British geographer L. D. Stamp who is considered founder of modern land use research. Last, but not least, the Polish geographer J. Kostrowicki who focused on typology and classification of agricultural systems in the second half of the twentieth century. Current approaches in land use research in the world are also discussed. Special attention is given to the DPSIR model that works with “drivers” and “pressures”, “impacts” and “responses”. The multi-level explanatory scheme, formulated by Scottish geographer A. Mather, is seen as the most complex concept used in land use research so far. Mather worked with proximate, intermediate, and underlying factors and he is also the author of the “forest transition” concept. In Czechia, the first research projects focused on land use were carried out in the early 1960s. At the moment there are two main research directions: analyses of small areas, and complex land use studies carried out by the so-called “Prague school”. The latter studies often span a long period of time, starting in late eighteenth century. Old maps are utilized for comparisons; recently also remote sensing data have become available.