Snow leopards in Nepal, is the title of a new book produced by Springer, edited by Prof. Pavel Kindlmann from the Institute for Environment of the Charles University. The publication is the only one so far to provide comprehensive information on population dynamics and presents not only a comprehensive overview but also new, previously unpublished data from 15 years of intensive photo-trapping combined with sampling and analysis. These data could be useful for other researchers working on the snow leopard. In addition to the editor, the co-authors are former or current PhD students of the Institute of Environmental Science, Faculty of Science, Charles University. 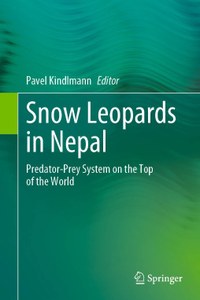 The snow leopard (Panthera uncia) is an endangered species and its population is steadily declining. The main threats to the snow leopard include illegal trade, conflict with local people (human-snow leopard conflict), lack of conservation, awareness and policy, and climate change. In order to prevent its extinction, we urgently need a good understanding of its ecology, distribution and population dynamics, including interactions with its prey, taking into account different scenarios of climate change and human impact on the snow leopard. The aim of this book is to bring together a considerable amount of previously unpublished data, collected by Bikram Shrestha, co-author of most of the chapters, which could be useful to other researchers working on the snow leopard. In addition, a key to determining the diet of the snow leopard based on food remains in its droppings could be useful to researchers. Finally, based on the difficulties we have experienced in trying to compare and combine different sets of results, we propose a general methodology for data collection. This book is thus not an all-encompassing compendium, but an attempt to fill some gaps in the literature and to show how to publish new data on the snow leopard in a useful and usable way.

Pavel Kindlmann is Professor of Ecology at Charles University in Prague and Head of the Biodiversity Research Unit at the Institute of Global Change Research, Czech Academy of Sciences. His main interests include population and metapopulation dynamics and the evolution of life history strategies, with a particular emphasis on insect herbivores, orchids and large mammals. He has authored or edited several books on orchid population systems and conservation biology, including the Himalayan region, and has published more than 150 scientific articles in major journals.