One billion dollar not enough to halt orangutan decline

A new study recently published in prestigious journal Current Biology shows that orangutans are still rapidly declining despite more than one billion US dollars invested in their conservation between 2000 and 2020. One of the co-authors of the study is Erik Meijaard, who until the end of February was a visiting professor at the Department of Ecology of our faculty. 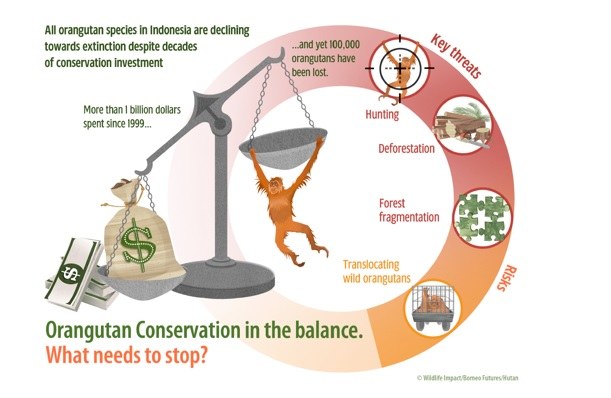 Things are not looking good for the orangutan. All three species of orangutan, which occur only in Indonesia and Malaysia, are classified as Critically Endangered. This means they face imminent extinction unless we manage to protect them better. A new study suggests that these iconic big red apes may be in need of a better investment strategy.

A recently published study used data on orangutan conservation investments to assess how much was spent on forest protection and management, patrolling and law enforcement, rescue and rehabilitation, and other strategies. The researchers estimated how much each of these activities benefitted local orangutan populations compared to doing nothing at all.

Dr Truly Santika, the lead author of the paper, explained the value of this complex analysis. “To our knowledge”, she said, “no one has ever fully analyzed the costs and benefits of different conservation activities for the likelihood of survival of a protected species. Similar analyses could be applied to many rare species. Considering the urgent need to conserve biodiversity, it is important such cost-effectiveness analyses are developed to optimize the investment of limited conservation dollars”.

What the study made clear is that certain activities are more cost effective and better at saving orangutans than others. Habitat protection, patrolling, and community engagement strategies had the greatest return-on-investment for maintaining orangutan populations. Restoration of orangutan habitat through reforestation was especially expensive compared to forest protection and management. Rescue and release of previously captured orangutans had low-cost effectiveness because it had little deterrent effect on illegal orangutan killing and trade, and it did not increase wild populations within current species ranges.

[Julie Sherman or Marc Ancrenaz], one of the contributing researchers, noted, “Rehabilitation and release is an important tool to recover species that have few individuals left in the wild. If we act now, we can protect wild orangutans in their natural habitats, which is much more cost-effective than trying to restore their populations once they have been killed, captured, or displaced from their homes.”

Costs of orangutan conservation activities vary by area. In the Malaysian part of the orangutan range, land prices and labor costs are much higher than in Indonesian. This drives up prices of activities that require the acquisition of land, such as the establishment of protected areas, or the involvement of many people, such as patrolling.

“What is most important in this study”, said Professor Erik Meijaard, one of the contributing researchers, “is that it shows us that what we are investing in might not be particularly good for orangutan survival. The study really shows us that if we want to save the orangutan from extinction, we need to invest in the basics of nature conservation, which is the protection of species habitats and working with local communities to reduce threats such as killing and capture”. 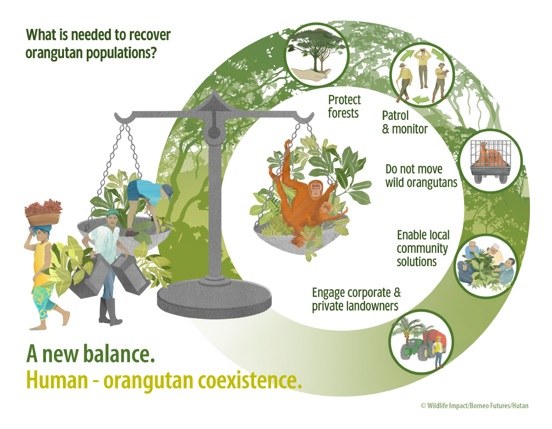