The force forming the sandstone monuments

It is a rare occasion in any scientific field when a scientist or a team of scientists clarifies one of fundamental, but until now unknown principles. But that is exactly what was achieved by the collective of geologists lead by Jiri Bruthans from the Institute of Hydrogeology, Engineering Geology and Applied Geophysics of the Faculty of Science of the Charles University. Their article published in the most prestigious magazine in this field, Nature Geoscience, explains the forming of sandstone monuments in an easy and elegant way.

Sandstone arches, towers, overhangs or pillars are one of the most popular attractions of the sandstone cities which abound in the Czech Republic too. Every pupil would answer the question how are these monuments formed without hesitation – by erosion. Not even geologists have considered any other explanation. So far all the models of creation were complicated and far from elegant, but the professional community accepted them. The theory introduced by the team of Czech-American scientists offers an explanation co simple that it makes you wonder nobody thought of it earlier. Those are words used by the reviewer from the Nature Geoscience magazine. On the cover of the issue form this August (the article was published on line on July 20) is a picture of a sandstone monument described in the article. 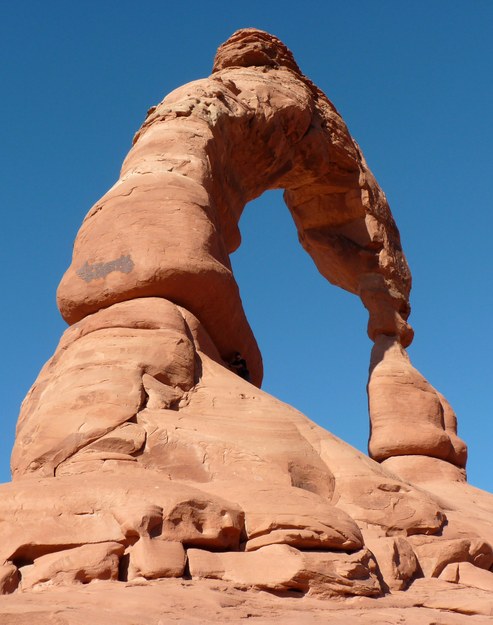 Delicate Arch in Utah is one of the most famous and admired sandstone arches of the world. Photo by Jan Soukup.

However, the journey that lead to these clear findings was far from easy. In the beginning was research of Jiri Bruthans and his students and colleagues: Jan Soukup, Jana Vaculikova and Jana Schweigstill in the Strelec Quarry. They went to this location to follow a completely different hydro-geological problem. During their research amongst regular sandstone they discovered a slightly different stone called locked sands. This material is made of sand grains the size of up to 2mm in diameter, the same as sandstone, however the way of cementing is different. The classical sandstone is cemented on the basis of carbonates or ferrous compounds brought by water. The grains of locked sands are not cemented. During tens of millions of years they were just shaped to fit perfectly into each other, the same as the blocks of Inca buildings. The results are slightly different physical qualities of minerals that are otherwise very similar in structure. 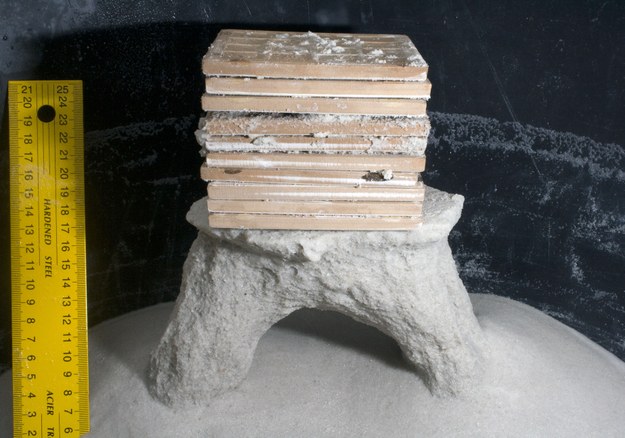 The result of experiments with the Strelec sandstone – a perfect experimental arch created by repeated flooding of a weight-bearing block with rectangular hole. Photo: Jiri Bruthans and coll.

Since miniature arches and pillars were forming in the quarry naturally, the scientists decided to find out how the formation works. Blocks of locked sands were transported to the Albertov Laboratory and Jiri Bruthans employed many of his students in the research of the locked sands blocks qualities under various weights and mechanical damage. The team, supported by professionals from the Geological Institute and The Institute of Rock Structure and Mechanics of the ASCR and from the Brigham-Young University in Provo, Utah, slowly started to see the foundation of this fascinating theory.

“When my colleague came to me, as to a professional on mineral mechanics, with questions that arose from the first lab works, I thought we will be done soon. The physical qualities of minerals are usually very-well described,” says David Masin from the Institute of Hydrogeology, Engineering Geology and Applied Geophysics about the beginning of cooperation. What was the big surprise that in the end lead the scientists to the right way? The results of lab works with blocks of locked sands showed quite contra-intuitive results. The less weight was put on the blocks, the easier was their failure, the easier they broke into single grains. This observation was just a small step from the idea that the mysterious force responsible for the amazing shapes of sandstone monuments is the tension in material caused by gravity.

Sequence of “manufacturing” a rock window/gate on a slice of Strelec sandstone wrapped in foil (substitution for the mineral surrounding). The effect was achieved by disturbance of pressure transmission by „artificial crossing of fissures“ and flooding: a - the first stage, b – quick shattering of sandstone grains from the zone of disturbed pressure transmission during flooding, c – the final stable shape after removal from water. Photo: Michal Filippi

However, this one principle would not be sufficient for the formation of rock monuments. “Another factor influencing the final shape are the inhomogeneities in the mineral; that means various fissures, layers and so on. The force is not distributed equally thanks to those. The final pressure actually “avoids” these interferences. It works as an invisible sculptor carving the predefined shape from the mineral. As soon as erosion takes away all the eroded material, the stable shape stays,” describes the concurrence of both factors another of the authors of the article Michal Filippi, absolvent of our faculty, today working in the Institute of Geology AS CR.

The concurrence of both principles is fundamental for the “crystal clear” solution. “The material tension is given by the ratio of force and surface. When the gradual erosion, thanks to the above mentioned process, removes grains from the block, the surface is getting smaller. That causes increase in tension in the block. In the end s the shape locked, thanks to this force, and becomes stable. This is how all the unbelievable shapes hold together, unless they are destroyed by some outer influence not connected to this process”, David Masin describes the basic thesis of the article. 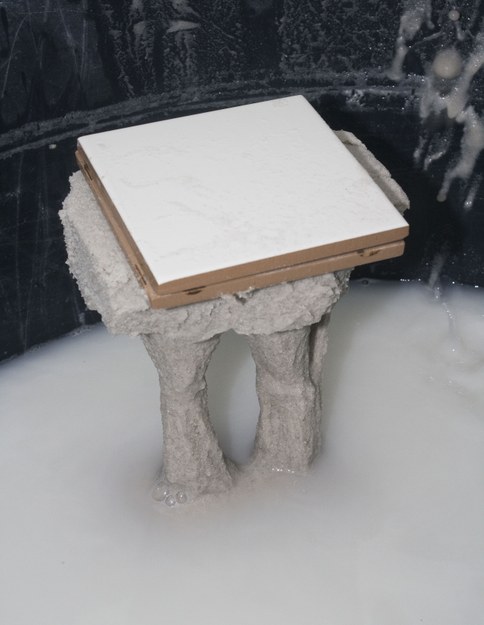 How is it possible that such an easy solution was unknown within the frame of Earth mechanics? “It is apparently because the stress that plays a significant role is much smaller than the one relevant in routine praxis of Engineering Geology, for example when calculating tunnels,” explains David Masin. Also, the scientist are usually focused on many technical details of the erosion process, especially various environmental physical and chemical factors and the perspective of the whole often eludes thanks to solving technical details. The choice of laboratory material, the licked sand, was a lucky choice. “Its unique characteristics allowed us to observe procedures that normally take much longer time and space in our own eyes. But since the inner structure of both minerals is very much the same, we proved the possibility of extrapolation even to this extent,” adds Michal Filippi.

A significant part of the experimental work was devoted to verifying the original theory on materials coming from other parts of the world, for example from USA or Venezuela. Since the scientists came to the same results, their extrapolation became much more solid. “The added value of our cooperation is that we did not just state what is the behaviour, we actually developed a new material model describing the formation of the same structures in sizes ranging from experimental laboratory model to sizes common in nature,” explains David Masin. The support of the colleagues who were familiar with the ideas eventually lead them to applying for publishing in the most prestigious magazine in the field – nature Geoscience. 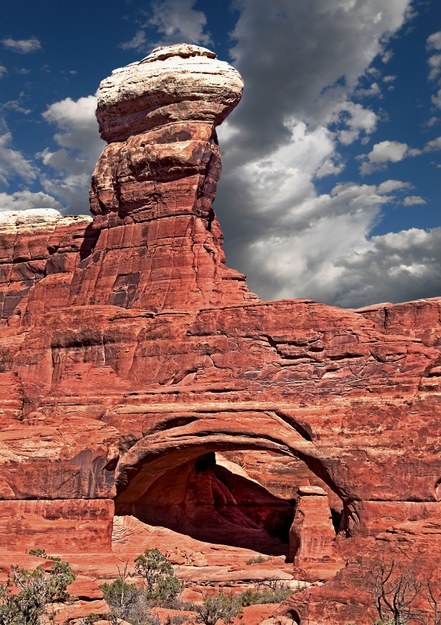 Tower Arch in the Arches National Park in Utah is a nice example of two phenomena (Mushroom Rock and Rock Arch) created according to the principle of the link between erosion and the topsoil pressure transmission. Author: Michael Atman

The fact that the findings of Bruthans’ scientific team appeared on the prestigious cover is no coincidence. “The publisher contacted us and asked for illustrative photographs. We knew it was a big chance and we started to gather photographers who devoted themselves to these natural objects. The editors of Nature Geoscience picked from the pictures sent and chose the photography by Dutch photographer Marsel van Oosten. He provided the picture without any financial compensation from the magazine, because it actually is an amazing advertisement for him,” describes Michal Filippi. Let’s add that the work of Bruthans’ geological team is also a great advertisement for the quality of scientific work on our faculty and also an example of exquisite cooperation with workers of Institutes of AS CR (especially the Institute of Geology and the Institute of Mineral structure and Mechanics). The research was financed by the grant GACR 13.28040S.

We’d like to thank the management of the Sklopisek Strelec as company, especially the director Ing. Petr Hubner, for facilitation of years-long research in the quarry and sample collection and also the workers for the technical support.