Faculty / Actualities / Archive 2014 / A prize which makes you think

A prize which makes you think

The Ig Nobel Prize, awarded since 1991, may be humorous but it has deeper meaning: after the laughter dies down over how strange the research is, it’s intended to make us think. This year the laureates included several Czechs. We set out to talk to Professor Jaroslav Flegr shortly after he returned from the ceremony with his prize shaped like a dining hall tray from Harvard University, where the awards were presented. 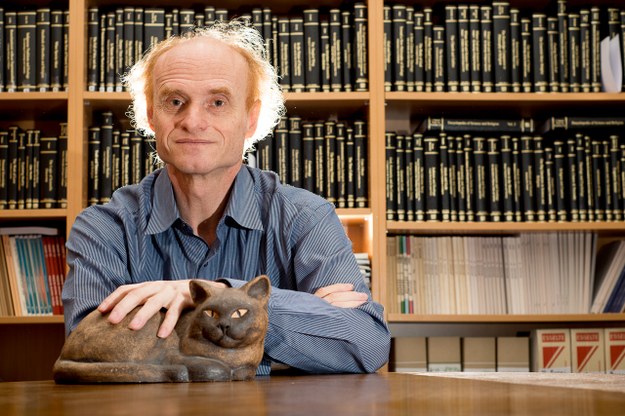 Professor, a few days ago you returned from the United States where you received the Public Health Prize along with an American team comprised of David Hanauer, Naren Ramakrishnan, and Lisa Seyfried. The prize was awarded jointly for investigating whether it is mentally hazardous for a human being to own a cat. How did you come to receive this award?

I and my colleagues, Jan Havlíček and Jitka Hanušova-Lindova, received this award in connection to the work of the American team that was recognized along with us. This year they were able to publish an article in which they showed that people who are bitten by cats are at an increased risk for depression. This risk is truly quite high, almost 40% in women, while the risk for the entire data set is around 9%. The Americans had an extensive data set of one million three hundred thousand patients at their disposal and the results were absolutely convincing. While attempting to find an explanation for this phenomenon they came across several of our works on the effects of the feline Toxoplasma gondii parasite on human mental health. Our work was not on depression but schizophrenia – where we observed a clear connection. However, there are also some studies by several other foreign teams which indicate a connection between toxoplasmosis and depression.

In your opinion, the results of the Americans are quite convincing. How was it possible to connect the two phenomena?

When I learned of this study (thanks to the Ig Nobel Prize commission), I attempted to verify its conclusions by asking 5000 volunteers to fill out a questionnaire on our Facebook page. They were our guinea pigs. It turns out that the Americans are right – there actually is a connection between cat bites and depression, but only among toxoplasma-positive people. We do not yet have an explanation for this phenomenon. According to our present knowledge toxoplasmosis is certainly not transmitted through biting. So far, the Ig Nobel Prize has served its purpose – it truly made us think and opened up some new avenues for pursuing further research.

You basically received the “lifetime achievement” award. Your have been researching the effects of toxoplasma on human behavior for nearly a quarter of a century.

At the beginning it was really about doing something with nothing. We wanted to examine the manipulative influence of a parasite on the behavior of its host, but we didn’t have any money for laboratory mice. What we did have was plenty of students and so we gradually began to examine the effects of this parasite on people. This “cheap” research soon began to bear interesting results. According to our findings, toxoplasma is able to influence its host by decreasing the host’s awareness. In people this can lead to more frequent traffic accidents and work injuries. Considering the fact that infected people have a 2.7 times higher risk of accidents and each year several million people die on the roads, toxoplasma is probably indirectly responsible for millions of deaths annually. The effect of toxoplasma on the development of schizophrenia, in particular its more serious forms, is also significant. Roughly one out of 100 people will develop schizophrenia at some point in their lives, so this affects tens and probably hundreds of millions of people annually. Thanks to what began at our department as a cheap alternative to more expensive research, global science now has motivation to develop therapeutic procedures or vaccinations against latent toxoplasmosis. Before we published our results, there simply wasn’t any reason for doing something like that.

These practical impacts are really important. Does your research have any significance with respect to basic research, pure science?

Understandably, I would be very pleased if our results had a practical impact on public health. Nonetheless, I am a scientist and am interested in the broader consequences of our findings. In this regard, the most important result of our work is discovering the function of the Rh factor. The scientific world has known about Rh blood groups, that is, the difference between Rh positivity and negativity for about 80 years. But there was no explanation for Rh positive and Rh negative people existing in the same population. It was also not known whether the Rh factor had any effect on human physiology. However, we were able to show that Rh positive people are resistant to some of the symptoms of toxoplasmosis, especially if the Rh gene is heterozygotic , i.e. if they have one copy of the gene for Rh negativity and one for Rh positivity. According to our newest research, the Rh factor even has an effect on resistance to other harmful factors such as smoking, the effects of fatigue or aging. It appears that Rh negative people are also very sensitive to certain diseases.

Let’s get back the prizes and the ceremony from which you have recently returned. The award is given for research which “first makes people laugh and then makes them think.” I must say that I understand the second part, but the core of your research does not seem that comical to me.

When they called me six months ago and said that they wanted to award the prize to me and asked if I would agree to it, I was also surprised. At first I thought that the committee wanted to award us for an older study in which we showed that people infected with toxoplasma are less bothered by the smell of cats. There is a great deal of work which documents this phenomenon in rats and mice, but we were the first to show this in people. At first glance this research probably does seem pretty comical. However, traffic accidents and schizophrenia are not very funny to me. The connection here though is the study of our American colleagues who cited our work.

The nomination was for “owning cats”. Does your work really only pertain to ownership?

Right off that was a mistake. Our most recent study yet to be published even shows that, to the contrary, owning a cat contributes to greater peace of mind. The problem occurs when a cat bites a person. Here, the parasite is apparently either manipulating the cat to bite the person, or, and this seems more likely to me, is able to manipulate the person into letting themselves be bitten by the cat. An important condition is for the person to be living together with the cat, so they actually were not too far off in the nomination.

Hynek Burda. This team received a prize for discovering that “when dogs defecate and urinate, they prefer to align their body axis with Earth’s north-south geomagnetic field lines”.

This is a similar problem. The research of Professor Burda and his colleagues involves the search for a very hidden sense which apparently exists in numerous groups of vertebrates and possibly even people. This sense enables perception of the geomagnetic field. This sense apparently does not send signals to the cortex, but to other parts of the brain. As a result, we are not even aware that we perceive the geomagnetic pole. Despite the fact that this research has been called into question, especially by the Czech Skeptics Club Sisyfos, this is serious work which may lead to a major discovery.

It appears that the prize winners were quite carefully selected.

Since these awards were first given out in 1991, the concept has evolved, moving from pure satire to today’s approach. An important criterion for making selections is that at first glance the research appears to be nonsense, yet upon closer inspection proves to have some merit. This shift has occurred quite naturally, as it is very rare that any actual nonsense appears in professional journals. It just appears that way to the uninformed. The commission which awards the Ig Nobel prizes has repeatedly found itself in the situation where it has invited a scientist with some humorous research and in just a few minutes this person demonstrates that his or her research is not funny at all. For example, there was a great deal of attention over the award for research on head injuries caused by falling coconuts. The reality, however, is that in some areas this is truly the frequent cause of serious injuries and should be studied. Over time, the commission has come to its senses and changed the general concept of the prizes. Originally they were awarded for “discoveries which cannot or should not be repeated”. Today, however, they are given for “discoveries which first make you laugh and then make you think”.

I thank you for the interview and hope that this prize is not the last Nobel you win.

To watch a video of the Ig Nobel Prize awards ceremony, click HERE