A new perspective on how early protein-RNA interactions evolved

Protein-RNA complexes are ubiquitous in modern life and are essential to many stages of the cell cycle and metabolism. New research presents experimental support to provide a new perspective on how early protein-RNA interactions evolved. The paper was recently published in prestigeous journal Molecular Biology and Evolution by the team led by Klára Hlouchová of Department of Cell Biology and IOCB Prague.

RNA-peptide/protein interactions have been of utmost importance to life since its earliest forms, reaching even before the last universal common ancestor (LUCA). However, the ancient molecular mechanisms behind this key biological interaction remain enigmatic because extant RNA-protein interactions rely heavily on positively charged and aromatic amino acids that were absent or heavily under-represented in the early pre-LUCA evolutionary period. 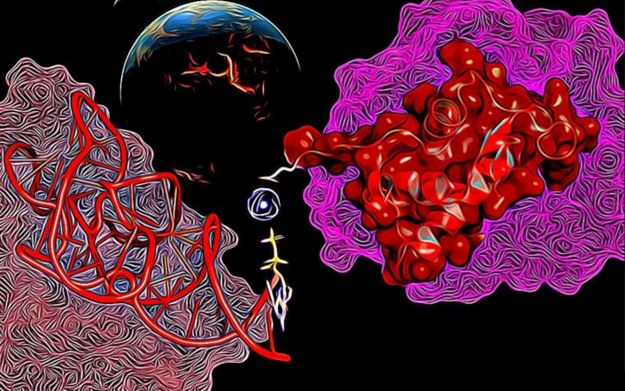 Now multidisciplinary team of researchers provide a study in which, an RNA-binding variant of the ribosomal uL11 C-terminal domain was selected from a ~1010 library of partially randomized sequences, all composed of 10 prebiotically plausible canonical amino acids. The selected variant binds to the cognate RNA with a similar overall affinity although it is less structured in the unbound form than the wild-type protein domain. The variant complex association and dissociation are both slower than for the wild-type, implying different mechanistic processes involved. The profile of the wild-type and mutant complex stabilities along with MD simulations uncover qualitative differences in the interaction modes. In the absence of positively charged and aromatic residues, the mutant uL11 domain uses ion bridging interactions between the RNA sugar-phosphate backbone and glutamic acid residues as an alternative source of stabilization.

Study suggests the possibility that positively charged amino acids were added later to the protein alphabet to fine-tuning of RNA-protein transient interactions but were not explicitly necessary either. “Our research presents experimental support to provide a new perspective on how early protein-RNA interactions evolved, where the lack of aromatic/basic residues may have been compensated by acidic residues plus metal ions” concluded the principial  researcher Klára Hlouchová from Department od Cell Biology at Faculty of Science at Charles University in Prague and Institute of Organic Chemistry and Biochemistry, Czech Academy of Sciences.