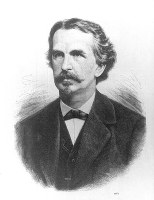 In 1871 came to university from the Czech polytechnic school the professor Frantisek J. Studnicka (1836-1903) who introduced the lectures on mathematics and his example influenced other lecturers as well. The Karl-Ferdinand University was in 1882 divided into the Czech and German as a result of long development and became a significant milestone in the emancipation of Czech science. It was an important stimulus for further development of science whose number of scientific positions almost doubled within the frame of mathematic-physical and naturalistic section. The scientific work was concentrated in university institutes, seminars and pro-seminars, whose function was not only preparation for teaching but the scientific work itself. After the division the science had six institutions on the philosophical faculty and mathematic-physical seminar. The education was secured by seven full-time professors, one extra professor and six private docents. In the head of the physical institute stood the professor Cenek Strouhal (1850-1922) who lead the institution up to 1920, the head of the chemical institution was the professor Vojtech Safarik (1829-1902), the institute of botany was led by L. Celakovsky, zoology by A. Fric, institution of mineralogy by the professor K. Vrba and the institution of geology by the professor Jan Krejci (1825-1887).

Under the lead of these personalities the private docents started to work pedagogically and scientifically and in the beginning of the 20th century gradually became a generation of internationally renowned scientists. The Philosophical faculty became the common working place of science that really bloomed before the First World War. The researchers in these branches overcame the framework of nationally perceived science and approached mainly modern laboratory and experimental methods. This trend is in chemistry connected with the names of the founder of experimental organic chemistry B. Rayman and organic and analytic chemistry B. Brauner. The physical geography was lectured by the docent of general and comparative geography Jan Palacky (1830-1908), the son of Frantisek Palacky, the new tendencies in geological research were introduced by Frantisek Slavik (1876-1957). The lectures on anatomy and systematics of lower animals were the beginning of working of the private docent of zoology and comparative anatomy F. Vejdovsky, the second most influential person of Czech biology in the second half of the 19th century, after J. E. Purkyne. He founded the modern Czech experimental science and from his school came many top researchers who shaped the Czech biology for the whole first half of the 20th century and in fact helped the founding of the Faculty of Science. 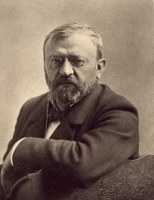 As for the spread and quality was the Czech science of the early 20th century on the same level as other university work places in Europe. It was more and more evident that the framework of philosophical faculty is limiting for the development, specific needs and diversification of science. The exemplar of the leading European universities had influence as well; they all had already established the independent faculties of science. That’s why already in 1908 the Czech scientists came with the idea of dividing of the philosophical faculty and founding of the new faculty of science. At the head of this effort were mainly professors of scientific institutes of younger generation Bohumil Nemec, Frantisek Slavik, Karel Petr and others. The delay of the foundation was cause by the First World War. After the foundation of the independent Czechoslovakia, in the context of reorganization of university education and science politics of the new state, the negotiations were renewed and eventually lead into the foundation of independent Faculty of Science that was proclaimed on 24th of June 1920. The parliamentarians of the first National gathering who became actively involved in this were the professors Bohumil Nemec, Otakar Srdinko and Frantisek Mares.

The Faculty of Science became the fifth faculty of the Charles University, the first of many modern faculties that complemented the four classical ones. After the foundation it was granted the buildings in generously designed areal with a botanical garden in Prague Albertov, the Prague’s district named after the distinguished Czech surgeon working in Vienna the professor Eduard Albert (1841-1900). The areal of the university was built from the beginning of the 20th century, during the First Republic and also after the World Was II and it involves the buildings of Faculty of Medicine, Faculty of Science and CVUT. Its dominating features are Hlavsa’s institute of pathology-anatomy and Purkyne’s Institute of embryology and physiology by the architect A. Spalka.

The scientific and pedagogical work of particular institutions could continually link to previous achievements, successes of particular field and international prestige of its representatives; however the space for further expansion of science was considerably extended. The education on the new faculty started in the winter semester 1920-21. There were 719 learners of natural science and mathematics and 130 learners of pharmacy enrolled for the first semester. The faculty provided studies of mathematics, physics, chemistry, biology, geology and geography. There were 13 departments, 2 seminars, pro-seminar and a cabinet; 15 full-time professors, 9 extra professors were employed by the faculty. The first deacon of the independent faculty was the professor of mathematics Karel Petr (1868-1950). 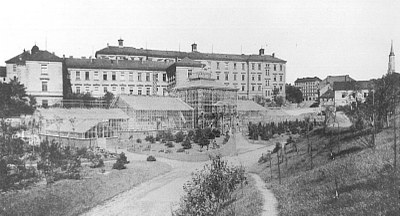