The genomics of X. tropicalis greatly facilitates the experimental approach to the problems of developmental biology. Krylov laboratory participated in the mapping of X. tropicalis genome jointly with Department of Biology and Biochemistry, University of Houston, National Institute for Medical Research, London and Université d’Évry- Val-d’Essonne, France. We have developed a method of gene visualization using tyramide amplification of labeled short coding DNA sequences (1,2,3). The determination of gene positions on chromosomes was used for the integration of genetic, physical and sequence maps of X. tropicalis (Fig.1)(4). Our group also developed the technique for the visualization of whole X. tropicalis chromosomes (Paint-FISH). Hybridization of labeled probes with X. laevis metaphase spreads shed a new light on its allotetraploid origin through two independent chromosomal fusions (5). In cooperation with Ben Evans laboratory from Department of Biology, McMaster University, Canada we would like to extend this approach to another Xenopus polyploid species. Krylov laboratory also aimed to the evolution of mammalian chromosomes (especially sex chromosome X) utilizing data from cytogenetic experiments and genetic map (6). 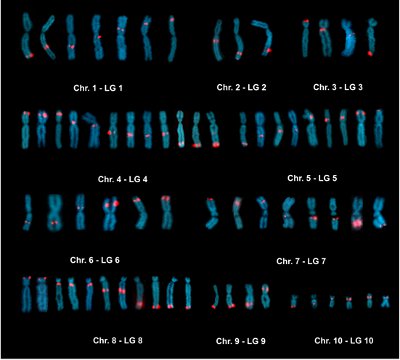 Another field of our interest is testis differentiation. The adult organ is composed just from four types of cells. Their complex interactions during the development bear down to their differentiation and to the formation of complicated morphology. Our group succeeded in establishing of long term cell culture derived from testes of juvenile froglets. The feeder layer of pre-Sertoli cells allows the growing of colonies of testicular stem cells (TSCs) (Fig.2). In general, stem cells have a great ability to self-renew and differentiate into wide spectrum of cell types. In our laboratory, we study TSCs migration and differentiation potential via their transplantation into early Xenopus tropicalis embryos and tadpole´s peritoneal cavity. To ensure the cell tracking during either ontogenesis or transmission into the next generation we established a population of transgenic frogs carrying Kathuska-RFP (red fluorescent protein) under control of ubiquitous CAG promoter (Fig.3). After mating with wild type animals we plan to select RFP positive F1 male tadpoles for subsequent establishment of labeled TSC culture. In cooperation with Faculty of Fisheries and Water Protection (University in South Bohemia in Ceske Budejovice) we developed a transplantation protocol for mutual microinjection of SSCs between Xenopus and fish model organisms such as zebrafish and sturgeon to study of the differential potential of transplanted cells in the evolutionary more distant recipient. The key partner, Mikael Kubista´s laboratory, from Institute of Biotechnology of the ASCR in Prague possess the single cell RT PCR methodology essential for the gene expression study of differential potential of transplanted cells isolated by FACS from disaggregated tadpoles or larvae. In Xenopus, provided we confirm the vertical transmission of transplanted TSCs it will be the first step for the adoption of gene knock-out methodology so far absent in this crucial model organism. 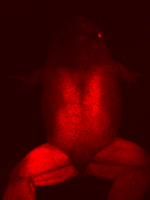 To see contacts on our team click here: Contacts of Research group of Developmental biology