Influence of fires on moth communities in Central European forests

The knowledge of forest fire consequences is still limited in Central Europe even though fire was an integral part of those forests during Holocene. Reduced forest resistance and resilience together with climate change and extreme temperatures already have visible consequences in Central Europe, it is therefore crucial to understand natural forest dynamics to adapt management practices. Furthermore, there is a decline of numerous insect species that have been common in the Central European landscapes, many of such species are specialised to the open canopy forests that are shaped, besides other drivers, by fire. We studied composition of moth communities at 6 forest plots disturbed by fire and 6 nondisturbed forests in the Protected Landscape Area of Kokorinsko – Machuv kraj. Moths were sampled quantitatively by two portable light traps per plot, nine times from May till August 2018. Altogether, we sampled 23000 specimens of 220 moth species. In the contribution, we will present differences of moth species richness, as well as their community composition, between both forest plot types. We will also focus on preferences of species of conservation concern. 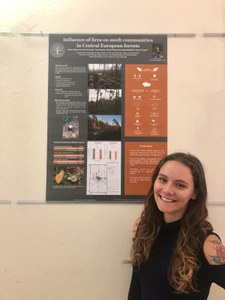